The journal Nature has named the article that Reuben M. Baron and David A. Kenny published in 1986 in the Journal of Personality and Social Psychology one of the top 100 most-cited research publications of all time, entering the list at number 33. The publications on the top 100 list were published between 1925 and 2008; that the Baron and Kenny article had far less time to accrue citations than most other papers on the list makes their accomplishment all the more distinguished. Of the six publications in the disciplines of psychology and psychiatry to make the list, the Baron and Kenny article is the second most cited even though it is the most recently published of the six. 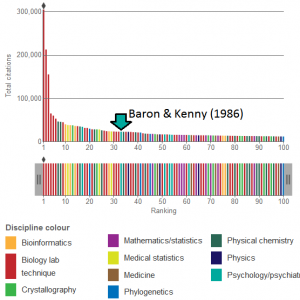